Labradorite is a majestic stone of strength, protection, and transformation. A member of the plagioclase family, it is comprised of feldspar and was named by Moravian missionaries to Labrador in 1770. This stone’s remarkable physical appearance lends to its magickal and spiritual applications. According to Inuit legend, the aurora borealis was once trapped inside this stone, until some of its light escaped into the sky and became the magnificent northern lights. This legend speaks to the play of light and flashes of colour within labradorite’s structure. The stone itself is an unremarkable grey-green colour and somewhat translucent. The wonderful iridescent display—specifically called labradorescence—is the result of separated and layered intergrowths within the stone. The depth and orientation of these layers, along with the angle of the light source, determine the effect. The colours range from bright blues to sea green, golden yellow to copper, and sometimes even violet. While first identified by Europeans in Labrador, it has since been mined throughout the world. Much of the labradorite on the market today comes from Madagascar. It is a very popular semi-precious stone used in jewelry, and has also more recently been used to produce stylish floor and kitchen tiles.

One of the primary energetic qualities of labradorite is its capacity to aid us in finding our own inner spiritual strength. The bright colour display of this stone emanates from deep within its crystalline layers. In this same way, it can become a powerful ally in our own journeys to discover the radiance within. When observing the stone closely, the emergence of colour and light informs each stone’s individual quality. A piece displaying mostly blue will have a slightly different personality—or energetic signature—than one rich in yellow tones. No two are alike. Forging a relationship with labradorite can also be a journey in discovering our own latent spiritual gifts. For me, a primary keyword for labradorite is Protection. By this, I mean it strengthens and fortifies the aura, bolstering it from within so that you may deflect negative, inappropriate, or unwanted influences. We are always in co-creation—sharing healthy amounts of energy with one another and all of Nature—however, some empathic and highly sensitive types have much more permeable energetic boundaries. If you sense that your empathic nature drains you, labradorite can be helpful in constructing a more autonomous field. This is not to say that you must sever bonds with the world around you, but often we can be unaware, or unconscious, of unbalanced energy exchanges, especially over long periods of time. For those in unhealthy relationships with others—or oneself—this is very important. Only in understanding and strengthening our boundaries are we best able to discover our true selves. So often we fall into relationships that demand we mask or hide our authentic selves for the sake of a job, to satisfy family members, to please a partner, to meet the expectations of self. Working with labradorite can help the process of finding your voice and identity in a world of others seeking to do the same, which often results in many adhering to models set by popular culture and mass media. By strengthening the auric field, we establish safe space within our own being to be unedited and inhabit if the energy of others is too draining or demanding. This personal space is so important to allow breathing room to assess ourselves fully and honestly in a way we don’t often permit or find time for. By projecting a strong auric boundary—strengthened by labradorite’s shimmering light—we can grant ourselves the freedom to be vulnerable and explore insecurities that have perhaps long haunted us. 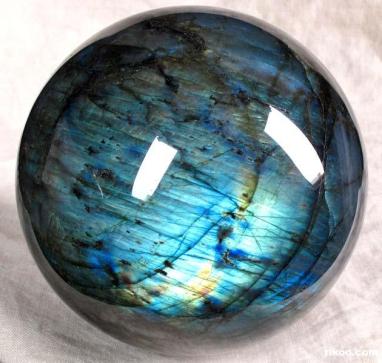 The shimmering flashes of labradorite connect us with Bifrost—the rainbow bridge between Heaven and Earth in Norse mythology. Being a channel—a conduit—between the archetypal essences of Earth and Sky—Yin and Yang, etc.—is the primary goal of much shamanic practice. The shaman—the magickal practitioner—seeks to balance within their being these energies; to possess the ability to shift, to step from one world to the next—from one mode of conscious awareness to another—with grace and ease. All is subject to the shifting, changing flow of the Cosmos—from the grand scale of galaxies, to all minute, atomic structure—and we are as much participants as observers in the fluid Universe. I consider labradorite to be one of the prominent shamanic stones—a crystalline guardian to altered states of awareness. Becoming acquainted with the nature of shapeshifting is to initiate oneself into the realms of the non-linear and the non-local. Labradorite can help with becoming accustomed to inhabiting this transitional space. Just as in the light the appearance of the stone shifts to reveal rich flashes of colour from what before was a dull grey surface, so does our being shift and metamorphose as we explore our existence among levels of consciousness. As we awaken Kundalini and explore the Tree of the Life within our own being, our vision can be trained to turn inward and gather insight from our subtle bodies and the non-physical world. Versions of ourselves exist on the Inner Planes as much as the outer, 3D reality of Malkuth—Muladhara, the Root Chakra—that we inhabit throughout normal, waking consciousness. 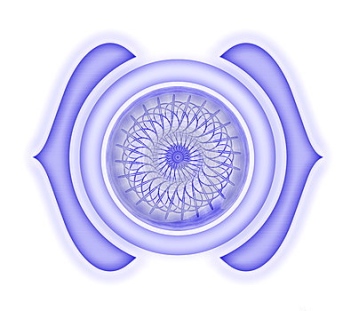 Shapeshifting can be a vital lesson in non-attachment—that the true nature of the Cosmos is not concretely objective. It is this changing perspective—evolving modes of seeing—that links labradorite, for me, to Ajna Chakra—the Third Eye. Associated with pure Light, Ajna means “Command” in Sanskrit and is the seat of our mental command—the centre of pure intuitive, spiritual knowledge. The lotus of Ajna Chakra has two petals representing the union of Ida and Pingala nadis as they rise up the spinal column and unite in divine wisdom at the energy vortex of the forehead. This reflects the perfect synthesis of polar forces, just as the union of Sky and Earth in shamanic practice. From this place of balance and awareness we may begin working to see with inner vision and learn to trust our intuitive, innate wisdom to create change in our outer lives. The ephemeral veil of the aurora borealis as it shifts and dances across the sky can teach us to release our dependence on concrete answers and finite, observable reality. Rather, it can aid in opening us to the realms of divination, imagination, and dreams. By trusting the world of our inner dreams and desires we become the Fool of the Tarot. The Fool is 0, the empty capacity of all things to come into being. The Fool is not silly or aimless, but rather bravely inhabits the process of the journey fully, setting foot out the door, embarking along the path ahead with intuitive trust, openness, and wonder. This is a fitting match for the month of January and stepping into the new year. January is named for Janus, the two-faced Roman god of transition and the new year. Janus looks back from where he’s come, but also casts his gaze to the future, inhabiting both to gather wisdom and clarity. Janus inhabits all worlds, accepting plural realities and the possibilities of All. This is the wisdom of labradorite. It can teach us to hone and develop our inner vision—building intention in the Astral Field so that it might manifest in denser form upon the Material Plane. Now that 2016 has dawned, we step into the growing light of the Sun as it waxes toward the Vernal Equinox in March. Harness this energy to develop your psychic sight to align the highest desires and greatest joys of our inner being with the world around you and walk the bridge between dreams and reality. Embrace change as a means for growth and expansion and work with labradorite as an ally to fortify your personal light as it mingles with the light of All That Is.